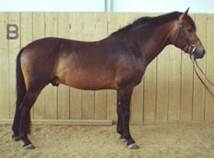 1994 14hh bay fully licensed English imported stallion. Woodrow Fieldmaster already had a very impressive show record as a yearling before his import in 1995 including some of the following:

Fielder is continuing his winning ways in Canada, winning Canadian Champion New Forest Stallion and Best of Breed every year shown since his import. He is green broke to drive and has excelled in dressage with scores of 7's and 8's on his free walk and 7's on trot.  His highest score was 65.8% on a Basic 1B test. Fielder’s offspring have inherited their sires lovely temperament, movement and pony character. His offspring are doing exceptionally well in Halter, Lead Line, Pleasure and Combined Driving, Hunter/Jumper and eventing.

Forest Hill Starborne
Starborne is now added to our stallions.